What a crazy day for Heliot Ramos, who started the game, played two positions, and hit two home runs and was involved in two outfield errors!  Ramos is definitely making a big impression this spring.

Meanwhile, Jason Vosler continues to be a spring legend, and the Giants decided to practice their baserunning against the Reds in Goodyear.  They also decided to hit for power, as the team hit for five home runs(after hitting just four combined in their previous spring games)!

Heliot Ramos – 2-4, 2 R, 2 H, 3 RBI, 2 HR, 1 SO – In his first at-bat, got a high breaking pitch and hit his first home run of the spring to left center.  Struck out in his second at-bat with the bases loaded, swinging and missing on a slider and then a curve.  In his third at-bat, he a grounder off the end of his bat towards the shortstop position, grounding out on what may have been a hit-and-run.  In his fourth at-bat, after the defensive collision, hit a home run to the opposite field in right, his second of the game.

On defense, caught a sacrifice fly and made a nice throw home, strong and on target, though not in time.  Later in the game, did a good job tracking a fly ball that the wind was blowing away from him.  In the sixth, shifted to center field, and on a double that was hit away from Ramos, showed off his arm again on a throw to second.  While in center, a pop fly was hit to right-center, and Ramos was under it as Basabe came over, and Ramos tripped over Basabe, dropping the ball.  In the seventh, Ramos went back on a ball in center, and as he got his feet set, he slipped, causing him to drop the ball for an error.

Oh my, what a day for Ramos.  At the plate, just no complaints.  He hit a home run to each side of the outfield, and I’ll take one strikeout for every two home runs.  The defense was a bit crazier.  The near collision was probably more on Basabe, but it was interesting because Basabe had been in center earlier in the game, and Ramos had shifted there from left, so maybe there was some miscommunication on who was calling off whom.  The second one was weirder, as it looked like Ramos might have been setting up to make a running throw when he slipped, but there was no reason to with just a runner on first.  Overall, a good day, even through the defense.

Jason Vosler – 2-3, 1 RBI – In his first at-bat, grounded out to third.  With runners on the corners in his second at-bat, he lined a single up the middle to get the RBI.  He got a good jump to pick up a stolen base with a runner on third ahead of him.  In his third at-bat, he pulled a hard line drive just fair down the first base line, but was held to a single after a ricochet.  Played second base for the first time.

No home run for Vosler, but he just continues to hit.  He also played second base, another shot for his versatility to earn him a shot at the roster.  He just isn’t stopping, and he’ll put pressure on the front office to keep him.

Joey Bart – 2-3, 1 R, 2 RBI, 1 HR, 1 SB – With a runner on second in his first at-bat, he shot a hard grounder towards first, handcuffing the first baseman and getting an RBI single.  Bart ended up getting a steal as well, though he got it on what looked like a blown hit-and-run (which was a strikeout for the batter).  His second at-bat, he swung at the first pitch and hit another hard groundball, this time to third, but this one was fielded and Bart was thrown out.  In his third at-bat, got a big curve, and he went down and golfed it into the left field bullpen for his first home run of the spring.  In the 7th with a runner on second, the runner on second got a great jump, and Bart had a strong throw but was high and late.

Another good hitting day for Bart.  All three balls he hit sharply, and the home run was impressive on a big breaking ball that was a bit low to be called a hanging banger.  He also picked up a rare steal, as the Giants were really running a lot on the baepaths.

LaMonte Wade Jr – 1-3, 2 R, 1 H, 1 RBI, 1 HR, 1 BB, 1 SO –  Struck out swinging in his first at-bat on a pitch in the dirt.  Flew out to right on the first pitch in his second at-bat.  In his third plate appearance, he worked the count full and drew the walk.  Wade picked up the steal off a good jump.  In his fourth plate appearance, he hit a home run to deep straightaway left (over the bullpen and party plaza out there at Goodyear).  Played first base for the first time this spring.  Made a nice play on a grounder to his right, on a 3-1 putout.

Wade took a shot play first base, and had no problems there.  The Giants are really looking at him as a center field option, and the versatility and a big home run definitely helped his cause.

Sam Long – 1.1 IP, 1 H, 0 R, 0 BB, 3 SO – Long came in with the bases loaded.  He threw a curve for a strike looking, a fastball get a strike swinging, and then a curve for the strikeout looking on three pitches. He finished off the seventh, and then stayed in for the eighth.  The first batter hit a fly ball to left field.  The next batter hit a bloop single to left-center.  He struck out the next batter on three pitches, with a fastball on the outside corner.  He finished the game off with a swinging strikeout on a low fastball.  Fastball: 96 MPH; Curveball: 75 MPH

Long was impressive as heck, coming in for a big situation and just rolling through the lefty at the plate he faced.  Despite a bloop hit, Long looked absolutely dominant.  I still they they want to push him out to be a starter, so he’d be going to the minors, but he’s going to make me regret not putting him among the Top Giants Prospects this offseason.

And I just want to share Steven Duggar’s home run, even though he’s past prospect status.

Marco Luciano – 1-1 – In his first at-bat, hit a slow bouncer to third, with the fielder playing back, and Luciano beat the throw for his first hit of the spring.  Defensively, got a tough play on a high bouncer that went behind second.  Luciano got to it with ease, but was unable to get the fast runner.

Luciano finally picked up his first hit, although it wasn’t a great pitch to swing at.  He’s continuing to develop.

Hunter Bishop – 1-2, 1 2B, 1 RBI –  With a runner on second in his first at-bat, he lined a low fastball down the right field line for an RBI double.  In his second at-bat, hit a sharp ground ball up the middle, but it was stopped on a diving play and the throw pulled the first baseman just off the bag, but Bishop was called out (no official replay).

Finally a nice day for Bishop, who probably got a second hit taken away, but it took impressive defense to even make it close.

Wilson was following up his two-error day at third yesterday playing shortstop.  No defensive hiccups or highlights, but another tough day at the plate.

Zack Littell – 1.0 IP, 1 H, 2 SO –  Struck out the first batter he faced swinging with a high fastball on a full count.  The next batter, Joey Votto, inside-outed a curve for a single.  Struck out the next batter swinging on a curveball inside.  Finished the inning on a high fly out to the warning track in left.  Fastball: 96 MPH.

Yunior Marte – 1.0 IP, 1 H, 0 R, 0 BB, 1 SO – Each of the first two batters were left-handed hitters who swung on the first pitch and hit fly balls deep towards the left-field corner for outs.  The next batter worked him to a full count, and hit a ground ball to third, but reached on an infield hit and got to second on an errant throw.  Marte struck out the next batter swinging with a curveball outside to get out of the inning.

Jason Krizan – 0-2, 1 SO – With a runner on second in his first at-bat, he hit a high bouncer to first base for a groundout.  Struck out looking in his second at-bat on a high curve.

Dominic Leone – 1.0* IP, 2 H, 2 R, 0 ER, 1 SO – Struck out the first batter he faced looking on three pitches, and got an easy ground ball to shortstop for the second out.  Gave up a deep fly ball to center for a double.  The next batter hit a fly ball to right center, and was dropped on an error, giving up a run and the batter got to third.  The next batter hit a grounder to third that got past the fielder for another run.  The inning was then ended with two out.

Luis Alexander Basabe – 0-1 – In his first at-bat, flew out to right field.  After being shifted to right field (normally plays center), came together with Ramos and led to a collision, with no injuries but the ball came free to allow a run.  The error was given to Basabe, although it was Ramos who had a glove on the ball.

Joe McCarthy – 0-1 – On the first pitch in his first at-bat, hit a fly ball to center for an out. 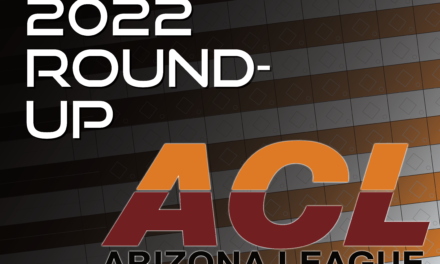